Father Michael Joseph McGivney (August 12, 1852 – August 14, 1890) was an American Catholic priest based in New Haven, Connecticut. He founded the Knights of Columbus at a local parish to serve as a mutual aid and fraternal insurance organization, particularly for immigrants and their families. It developed through the 20th century as the world's largest Catholic fraternal organization.

The cause for his canonization started in the Diocese of Hartford in 1996; in March 2008, Pope Benedict XVI declared McGivney "Venerable" in recognition of his "heroic virtue".  If he is canonized, he would be the first American-born priest to receive this recognition.

Michael J. McGivney was born to Irish immigrant parents, Patrick and Mary (Lynch) McGivney, on Aug. 12, 1852. He was the eldest of 13 children, six of whom died in infancy or childhood. His father worked as a molder in a Waterbury, Connecticut brass mill. Michael McGivney attended the local Waterbury district school, but left at the age of thirteen to work in the spoon-making department of one of the brass mills.

At the age of sixteen, Michael McGivney in 1868 entered Séminaire de Saint-Hyacinthe in Saint-Hyacinthe, Quebec, Canada. He continued his studies at Our Lady of Angels Seminary in Niagara Falls, New York (1871–1872) and at the Jesuits' St. Mary's College in Montreal. He had to leave the seminary and return home to help finish raising his siblings, due to the death of his father in June 1873.  McGivney later resumed his studies at St. Mary's Seminary in Baltimore, Maryland; he was ordained a priest on December 22, 1877, by Archbishop James Gibbons at the Baltimore Cathedral of the Assumption.

FOUNDING of the KNIGHTS OF COLUMBUS

From his own experience, McGivney recognized the devastating effect on immigrant families of the untimely death of the father and wage earner. Many Catholics were still struggling to assimilate into the American economy. On March 29, 1882, while an assistant pastor at Saint Mary's Church in New Haven, Connecticut, McGivney founded the Knights of Columbus with a small group of parishioners, as a mutual aid society, to provide financial assistance in the event of the men's death to their widows and orphans. The organization developed as a fraternal society. He was also known for his tireless work among his parishioners. McGivney died from pneumonia on the eve of the Assumption in 1890, when he was thirty-eight years old.

The Knights of Columbus was among the first groups to recruit blood donors, with formal efforts dating to 1937 during the Great Depression. As of 2013, the order has more than 1.8 million member families and 15,000 and councils. During the 2012 fraternal year, $167 million and 70 million man-hours were donated to charity by the order.

In 1996, the Roman Catholic Archdiocese of Hartford opened the cause for canonization, an investigation into Father McGivney's life with a view towards formal recognition by the Church of his sainthood. Fr. Gabriel O'Donnell, OP is the postulator of McGivney's cause, as well as director of the Fr. McGivney Guild. The guild now has 150,000 members supporting his cause.

The diocesan investigation was closed in 2000, and the case was passed to the Congregation for the Causes of Saints in Vatican City. On March 15, 2008, Pope Benedict XVI approved a decree recognizing the heroic virtue of Fr. McGivney, thus declaring him "Venerable".  A miracle attributed to the intercession of McGivney is under investigation at the Vatican.  If canonized, he would be the first American-born priest to gain that recognition.

PRAYER for the CANONIZATION of Father MICHAEL J. McGIVNEY

God, our Father, protector of the poor and defender of the widow and orphan, you called your priest, Father Michael J. McGivney, to be an apostle of Christian family life and to lead the young to the generous service of their neighbor. Through the example of his life and virtue may we follow your Son, Jesus Christ, more closely, fulfilling his commandment of charity and building up his Body which is the Church.

Let the inspiration of your servant prompt us to greater confidence in your love so that we may continue his work of caring for the needy and the outcast. We humbly ask that you glorify your venerable servant Father Michael J. McGivney on earth according to the design of your holy will. Through his intercession, grant the favor I now present (here make your request). Through Christ our Lord. Amen. (Our Father, Hail Mary, Glory be.) 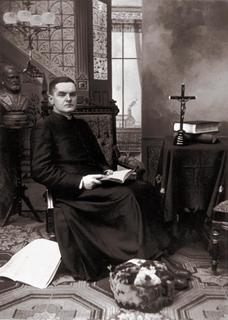